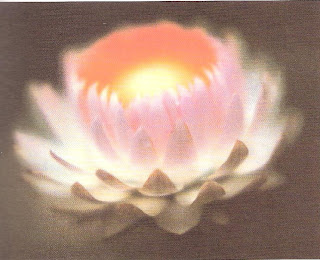 Those above photo was actually a moon taken at the time when  Master Guang Qin passed away, it just transformed into a nice looking lotus.

Maybe it's a coincidence that I practice Pureland method since a was a child that made me the affinity to know the greatness of Master Guang Qin and the rigorous way he maintained in his practice.

Master Kuang-ch'in (1892 - 1986) was born in Hui-an County of Fu-chien province in China. He was given up for adoption when he was four and was not educated, hence, illiterate.

He became a monk at the age of twenty-seven, but did not receive the formal bhiksu (monk) precepts until the age of forty-two. Meanwhile, he practiced asceticism and recitation (of the name of Amitabha Buddha).

After receiving the full bhiksu precepts, he dwelled in a cave in the mountains where he practiced meditation alone for thirteen years and attained an elevated level.

He came to Taiwan in 1947 and founded several monasteries, among them the Ch'eng-tien Temple of Taipei and Miao-tung Temple of Kao-hsiung. He had inspired a great many people into the dual practice of Zen and Pure Land doctrines. Those all the description above was taken/copy and paste directy from this source:
http://vajrasword.blogspot.com/p/analects-of-master-kuang-chin.html

In Taiwan Master Guang Qin was known as Sui Guo He Shang( the Master who ate fruits only), for his only diet was eating fruits ( this starting when he was 50 years old if I am not mistaken). Once people asked him why he only ate fruits. Then Master Guang Qin answered in a very humble way: Once he lived for several years in the forest to practice Buddhism, and fruits was the only option for him to eat. After that it become a habbit so he just continued eating fruits.